Roman engineers invented a new type of building in which to entertain the masses with spectacular performances: a theatre enclosed on both sides (Greek: amphi-theatre). The APX is one of the few places north of the Alps where the fascination of these buildings is still tangible.

Once the scene of fights between gladiators and animals: the Colonia's amphitheatre.

Large public events, such as fights in the amphitheatre and chariot races in the circus, were by far the most popular form of entertainment for the masses in antiquity. The large amphitheatres were regularly filled with spectators eager to see people and animals fighting in the arena. 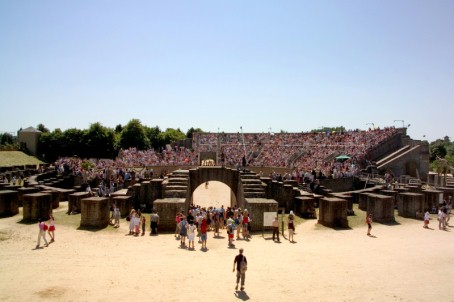 The building's free-standing design ensured easy access to the amphitheatre.

From the lively reports of ancient writers we know that people came to the towns from far and wide to watch the spectacles. That would also have been the case in Xanten. The amphitheatre's seating was sufficient to accommodate roughly the entire population of the Colonia

The reconstruction built in the early 1980s rests on the original pillars which were discovered during the excavations. The lower terraces and roughly one-quarter of the upper terraces have been reconstructed, thus revealing the building's dimensions: it was 99 metres long altogether with an outside wall roughly ten metres high 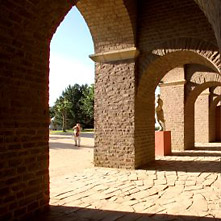 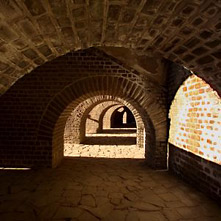 View into the vaulted passageways under the spectators' terraces.

While the common people sat in the upper rows, the three bottom rows provided sufficient space for the city's dignitaries to make themselves comfortable in armchairs. Rooms for the gladiators prior to their performance and cages for the wild animals led off from a passageway running through the vaults below the terraces. Little is known about the actual events that took place in Xanten's amphitheatre, but they generally involved bloody animal chases and fighting gladiators.

Today, the amphitheatre is once again the scene of regular performances, albeit without shedding a single drop of blood. Artistes of international renown come to Xanten to perform in the operas, operettas and musicals during the Summer Festival.

Gladiator fights are one of the highlights of the Roman Festival Swords, Bread and Games. The gladiators also present their authentic equipment during the Roman Weekends in summer. 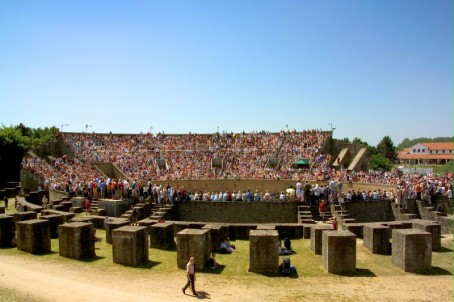 Every last seat is occupied, as in former times.