Even from a great distance, the harbour temple towering far above the city walls was clearly visible from ships approaching the Colonia Ulpia Traiana on the river Rhine. The impressive building provided a high-profile landmark of Roman culture.

The harbour temple: a monument of Roman architecture and urban culture. 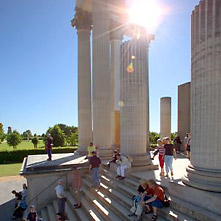 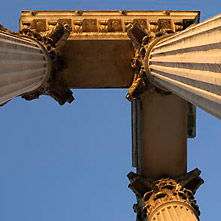 Reconstructed pillars and parts of the roof give some impression of the original effect.

One of the pillars has been painted in colour to illustrate the temple's originally magnificent colouring. Wide steps lead up to the temple's podium and its cella where the ritual acts took place. In antiquity, this was the prerogative of a select group of people; ordinary mortals were not allowed inside.

View inside the cella, the ritual centre, in the middle. No ordinary mortal was allowed in here. The photo on the right shows the original foundation plate under the temple.

The temple's foundation plate and innumerable fragments were discovered during the excavations in 1977 and the following years. Several of these fragments will be on display in the new Roman Museum. The foundation plate can now be reached via an entrance at the back of the temple, for the reconstructed building stands over it like a protective building. Interested visitors will find many archaeological traces dating back to the days when the temple was built almost two thousand years ago. 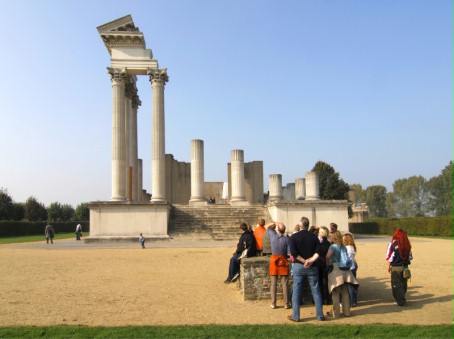 The reconstruction is also a protective building over the temple's preserved remains.