Travellers in Roman times often journeyed for many days and also had to endure many hardships. The Hostel at the Colonia Ulpia Traiana offered travellers a comfortable respite.

The reconstructed Hostel near the ancient harbour includes all the facilities in which travellers could relax.

Corridors lead off from the long colonnade to the guest rooms. The Roman kitchen is located at the end of the colonnade. Delicacies based on ancient recipes are prepared here during the Roman Weekends. From the anteroom, stairs lead down into the basement with the large storage vessels. 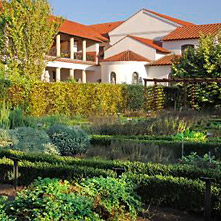 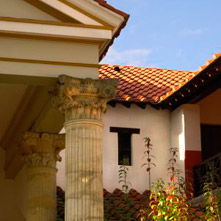 The herb garden is only a few steps further. Herbs and spices imported by the Romans still grow here.

Directly alongside the garden, the dining rooms of the Roman restaurant and tables on the veranda invite visitors to stop for a snack.

At the other end of the inn there is a permanent exhibition “Caesar, Senate and the people”. Modern media are used to tell the life story of important Roman figures.

Ample opportunity to spend time in the Roman Hostel.

Continuing along the colonnade, we reach the workshops used by the bone carvers and shoemakers. Qualified experts demonstrate their ancient craft here during the Roman Weekends.

An inner courtyard leads to the ancient bathhouse. It is still the only bathhouse anywhere in the world to be heated in the same way as in antiquity. A single wood fire heats the floors, walls and of course the bath water. 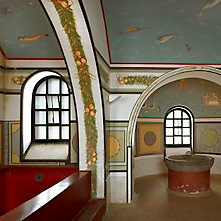 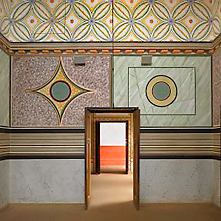 The special atmosphere of the Roman baths can still be felt inside the bathhouse even when it is not being heated. The bathhouse has four rooms at different temperatures. From ancient writings we know that the Romans greatly appreciated the typical sequence of cold, warm and hot baths.

Water and heat: an indispensable element in the quality of life for Romans, not only in chilly Germania.