You are her: Archäologischer Park Xanten > Archaeological Park > Themed Pavilions > Bread and Circuses

A new exhibition in the amphitheatre has recently been opened, showing the life of gladiators. Popular films are evidence of our fascination for the life and death battles that took place here. At the same time, there are many misconceptions. 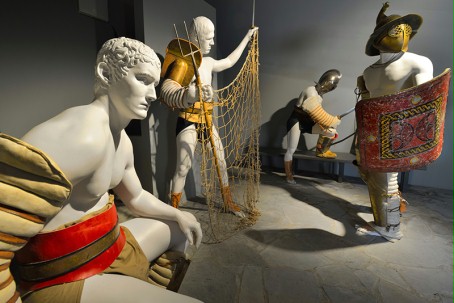 Four figures with the typical armament of various gladiators.

Eager to know more? You can arrive at your own conclusions in the APX. The exhibition follows the routine of events at that time. Firstly we see life-size figures with faithfully reconstructed equipment. In the dark corridors there are illuminated text panels and monitors showing battle scenes, providing a wealth of information about the ancient spectacles.

A few metres further on, the visitor is confronted by the virtual silhouette of a bear behind bars. In the morning session of the “games”, the animals had to face their fate in the arena. Trained animal fighters (bestiari) fought against bears, deer or boar, which were native to the local woods. 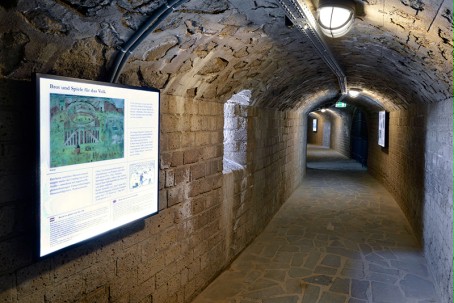 The execution of criminals followed in the early afternoon, followed by the appearance of the first gladiators. The highlight of the day was the battles between differently-equipped gladiators. The spectators were fascinated by the matching of lightly and heavily armed athletes, whose advantages and disadvantages largely cancelled each other out.

In the last room, further figures and pieces of equipment complete the tour. Moderate background noise of the sounds of battle and the roar of bears provides an atmospheric impression of the arena.