The Romans were exceedingly mobile. They had to be, otherwise they could never have built and defended their vast empire. Many travellers journeyed on foot. Those who could afford to, travelled on a donkey or horse or in a carriage drawn by mules.

A visit to the themed pavilions offers further insights into specific areas of Roman life.

A new pavilion on the lawn behind the playgrounds is packed with information on ancient highways, couriers, maps – as well as three roadworthy reconstructed Roman carriages and carts. These Roman carriages reconstructed according to the latest research findings are on display in the pavilion. The cisium was a light travelling carriage for two people with little luggage; the carruca was a more comfortable carriage and the carrus a proper cart for heavy loads.

Those who could travel in a carriage drawn by a horse or donkey fared best.

The metal parts and timbers used for the reconstructed carriages are supported by archaeological findings. All the carriages were hand-built by coachmakers using traditional techniques. In addition to the carriages, the pavilion also contains a reproduction of an ancient road map showing the Roman empire. 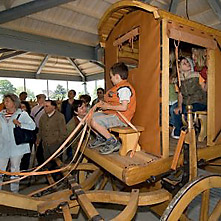 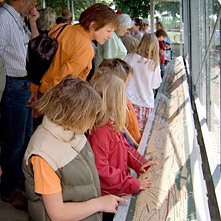 Travelling in Roman style: authentic carriages and an ancient map give an impression of the Romans' mobility.