A light-flooded building made of steel and glass rises up over the bathing wing of the Town Baths. It protects the original remains from the rain and sun and at the same time reflects the impressive dimensions of the Roman architecture.

The wide variety of roof shapes emulated by the modern building is typical for antique baths.

The floor layout permitted a fairly accurate reconstruction of the baths' architecture. Seen from outside, the different roof designs of the protective building give an impression of the baths' complex construction. On the inside, the modern steel structures visualise the imposing dimensions of the rooms. Red steel girders mark the former position of columns, walls and arches. Visitors who first took a look at the reconstructed Hostel Baths can even better imagine the grand effect of the larger Town Baths. 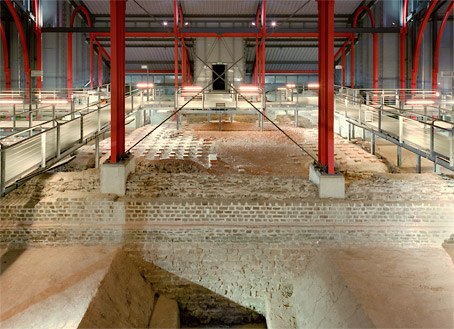 The red steel girders on the inside stand exactly at the former position of columns, walls and arches