You are her: Archäologischer Park Xanten > Welcome > Departments > Archaeological Excavation

The members of the archaeological team are often asked whether the entire Roman city has already been unearthed. Their answer will remain "no" for a very long time because at present only just under 20 percent of the total area of the ancient city has been excavated. 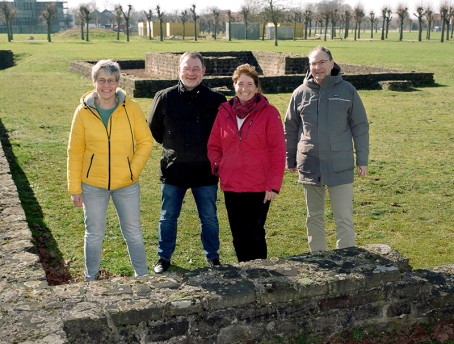 Prehistorian Dr. Norbert Zieling (on the right) heads the Archaeological Excavation department of the APX. Since 1988, he has been responsible for all archaeological research on the listed site of the city of Colonia Ulpia Traiana and its antique harbour.

Archaeologist Sabine Leih (in the middle) is the second scientist of the Archaeological Excavation department. In addition to the planning, organisation and supervision of the excavations, she actively promotes young scientists.

The archaeologist Silke Lauinger (second from right) successfully completes a scientific internship on the preservation and care of archaeological sites.

Christina Smerz (on the left) supports the Scientific Service, helping them, for example, to store the excavation documentation. She also archives the numerous field drawings, photos and other documents and is responsible for the APX slide library.

The members of the excavation team of the APX work the whole year round come rain or shine. They are well equipped for any weather, but most of the time the temperate climate of the Lower Rhine region offers them excellent conditions. 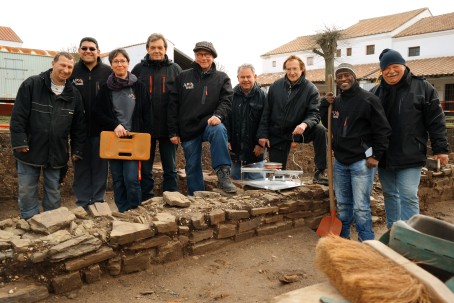 Like most of his colleagues, foreman Bernd Münster (on the left) has been excavating the remains of Colonia Ulpia Traiana in Xanten since the 70s. Site technician Hermann Keusemann (in the background) and excavator Horst Glatz (in front of him) also have many years of experience. Draughtsman Klaus Girnus (on the right) makes scientific field drawings.

Every excavation in the Roman city unearths pieces of pottery, bones and many other Roman artefacts. Meanwhile several million finds are stored in the APX depots. 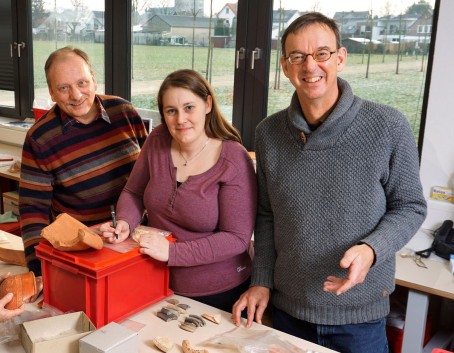 Dr. Bernd Liesen and Torsten Uffermann in one of the big depots of the APX

The finds are packed in tens of thousands of boxes which are stored in four huge halls. Even Dr. Bernd Liesen (not shown), who has been working with the finds for many years, only has a vague idea what the innumerable boxes contain because not all finds can be analysed right away. The excavations constantly unearth new finds that have to be analysed by him.

Torsten Uffermann (on the right) is the depot manager. He ensures that all finds are sorted and labelled before they are stored.