You are her: Archäologischer Park Xanten > Roman City

The Colonia Ulpia Traiana was one of the most important cities in the Germanic provinces of Rome in antiquity. During its height, it was home to more than ten thousand people whose history can be reconstructed from the traces they left in the ground. 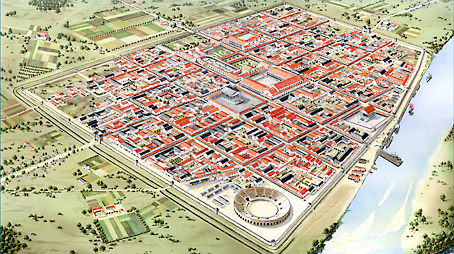 The Roman history of Xanten began with the arrival of the first legions in the year 13/12 BC. The Lower Rhine region was sparsely populated around that time, but from then on at least one legion was stationed in the Xanten area. In the 1st century after Christ, the biggest known legionary base of antiquity was established here.

In order to supply the up to ten thousand legionnaires with all military and daily necessities, the Roman army constructed roads and a harbour. The flow of goods handled there and the legionnaires' spending power soon also attracted numerous craftsmen, traders and other civilians who built a first settlement in the vicinity of the harbour.

During the 1st century after Christ, the settlement reached a considerable size. While the devastating revolt of the Germanic Batavers in 69/70 after Christ brought a temporary end to the settlement, peace was finally restored by new legions and only three decades later Colonia Ulpia Traiana was founded. 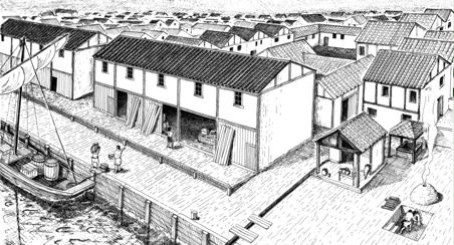 In 98 or 99 after Christ, the reconstructed settlement on the banks of the Rhine received Colonia status. It thereby became one of the 150 cities with the highest urban status in the Roman Empire. The Colonia was named after emperor Marcus Ulpius Traianus under whose rein the empire was to reach its biggest geographical expansion in the following years. 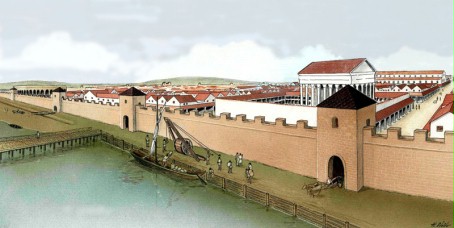 The 2nd century was the thriving period of the Colonia. All major buildings like the City Wall, the Temples, the Baths and the Amphitheatre date back to that time. Trade and the economy flourished as the province benefited from stable conditions. The Rhine was the city's main artery. In the surroundings of the Colonia, agriculture was the main economic activity. Latin was not the only language spoken - the population comprised people from a variety of cultural backgrounds and being "Roman" merely meant partaking in the shared culture.

A major part of the population earned their living as craftsmen and lived in so-called strip houses. The rooms facing the street were used as (work)shops while the living quarters were located at the back or on the first floor. Wealthier people could afford high-quality mural paintings, underfloor heating, sculptures, expensive furniture and precious dinnerware. But even simpler houses were decorated with mural paintings. Three of these Houses are currently being reconstructed at the APX.

Late antiquity and a new start

In the 3rd century, internal upheavals and external threats shook the empire. This weakened the economy and trade relationships. Towards the end of the 3rd century, the Colonia was finally destroyed by the Germanic Franks.

After the disastrous invasions of the Franks at the beginning of late antiquity, the area of Colonia Ulpia Traiana was significantly reduced and extremely fortified. During the 4th century, urban life on the site of the former Colonia probably ceased completely. After the end of the Roman era, the Franks settled outside of the old city in single homesteads and small villages. However, their culture was influenced by the Romans.

The old Colonia became more and more dilapidated and its area was no longer populated – much to the delight of today's archaeologists. In the following centuries, stones recovered from the ruins were used to build the medieval city of Xanten.