How did the people of the Colonia Ulpia Traiana live and work? A building project provides some of the answers.

Loam buildings are currently being reconstructed in the APX.

Most of the population lived in multi-storey buildings. Much is known today about the houses opposite the Roman Hostel, for numerous foundations and settlement remains have been excavated here since the 1980s. Three of these houses will be reconstructed in the coming years, complete with their interiors.

Archaeological findings show that the houses stood close together on strip-like lots. They had two storeys and a common front facing the street; smaller ancillary buildings and a shed filled the courtyard behind the houses.

Building with loam: a challenge for building researchers.

One special feature of the ancient buildings poses a particular challenge for the APX building researchers - the load-bearing outer walls were made of stamped loam and not of stone. A great deal of research was needed before the scientists found the right mixture of loam and the right wall renderings to withstand the damp climate of the Lower Rhine region.

Reconstruction of the first house finally began in May 2007. A slab of concrete was first laid over the Roman foundation walls to preserve the original building substance. The solid outer loam walls and the inner half-timber walls were then erected on this slab. Work proceeded smoothly during the first years. The houses will be completely finished and furnished in 2014. 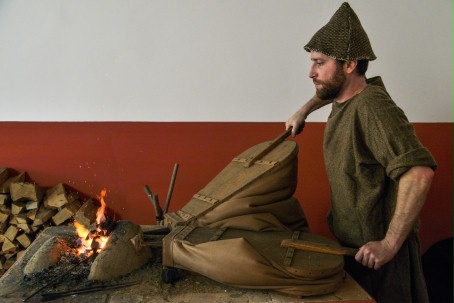 Next to the smith´s workshop is situated a smaller workshop for brass casting.