You are her: Archäologischer Park Xanten > Archaeological Park > Themed Pavilions > Caesar, Senate and the People

Caesar, Senate and the People – the rulers and the ruled

Within the rooms of the Roman inn, modern media give us an insight into Roman politics and society. Who made the decisions? What were the rights and duties of the common people? How was the Colonia Ulpia Traiana governed?

Made to speak: modern media are used to tell us about the life of prominent Romans.

A large-scale wall projection provides the essential background information and facts about the administration of the Empire and its provinces. At the core of the exhibition there are eleven busts with audio guides telling the stories of the eventful lives of prominent Romans.

Eleven figures on an interactive table explain the positions occupied by the members of the imperial family, the citizens, the freedmen and the slaves in Roman society. In a fun way, both children and adults find answers to their questions here. 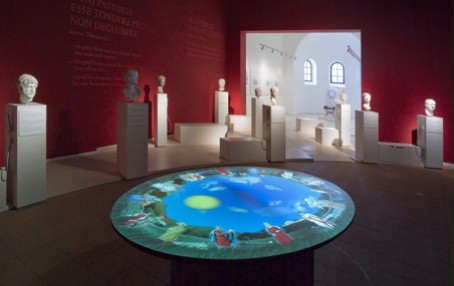 A view of the exhibition.